Travis Scott ‘Devastated’ After 8 Dead at Astroworld, Someone Allegedly Injected People with Drugs

12:02 PM PT — A new video appears to show Travis reacting to this situation and calling for help.

This is from another vantage point, but it seems to line up with the guy getting carried out. You hear Travis ask for security to jump in and help the man out … but he continues on singing.

11:50 AM PT — More questions about the Astroworld tragedy in regards to what Travis Scott and festival organizers knew about what was going on down below, and when … which is even more so under a microscope now after a video shows Trav looking down onto the crowd, where an unconscious guy is being lifted up and carried out, seemingly in TS’s direct line of vision.

travis is really singing meanwhile looking at a dead body? WHAT TF pic.twitter.com/saQ7UWx1zt

Check out the clip … you see Travis up on a rafter or elevated platform of some sort, singing to the crowd — while a lifeless, limp body is being carried off by security personnel. The clip makes it seem like this was right underneath Travis’ nose, and presumably something he could see. The caption reads “dead body” but we don’t know if this person was dead.

Of course, we also have no idea if Travis even saw this or not … although many online are claiming people in the crowd, including some who were near the front of the stage, were shouting at him to stop the show, as there were people falling unconscious in the audience.

We’ve reached out to Travis’s camp to ask specifically about this video … and whether he saw or heard any of this going on while he continued to perform. No word back yet.

10:30 AM PT — Speaking of ambulances … here’s a disturbing video. Astroworld fans dancing on top of an ambulance that was working its way through the dense crowd.

It’s not entirely clear if they were transporting somebody or not — you’d figure they’d have sirens going if it was a true emergency — but either way … here are some numbskulls who hopped up onto the roof of the vehicle and danced their ass off.

10:27 AM PT — Here’s Kylie’s vantage point from Friday night — she, Kendall and some friends were stationed toward the back of the crowd, somewhat elevated, where they could see sea of people and Travis and co. all the way up at the front. 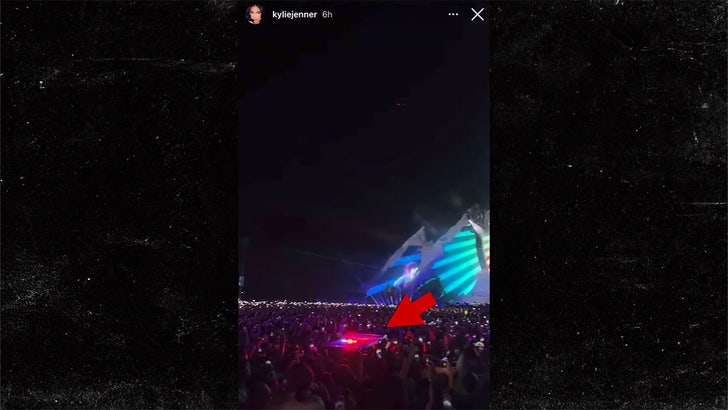 You can see it was an absolutely packed crowd, and one that was hyped too — jumping up and down together as Travis sings along.

One moment that Kylie appears to have since deleted from her IG Story is a moment when an ambulance appears to be making its way through the crowd on the ground below … something that was pretty much right in front of Kylie. Unclear if this was in response to one of the cardiac arrests or another situation — but it’s interesting that medical care started to be rendered right in the thick of the show.

9:24 AM PT — Travis says, “I’m absolutely devastated by what took place last night. My prayers go out to the families and all those impacted by what happened at Astroworld Festival.” He adds that he is committed to working with authorities to figure out what happened. 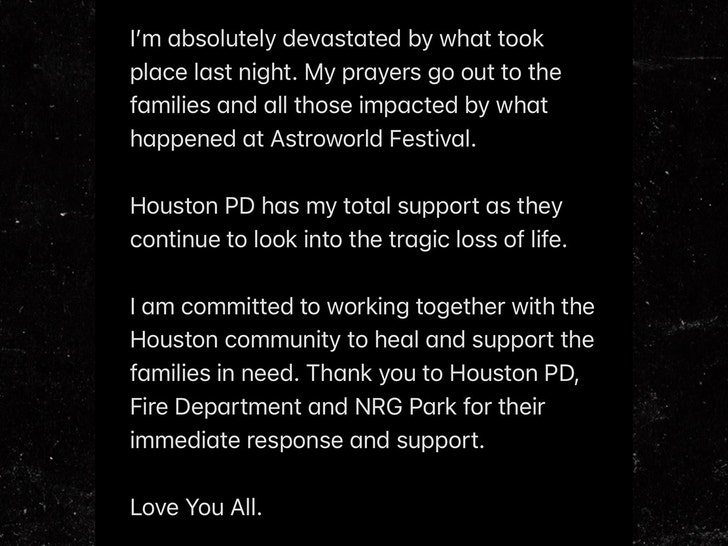 As for the investigation … our sources tell us at least one of the victims was seen foaming at the mouth before going into cardiac arrest — further evidence this was not simply a stampede. Houston authorities are planning to hold a news conference later today.

7:30 AM PT — A source connected to Astroworld tells TMZ, someone in the crowd went crazy and began injecting people with some sort of drug, which caused panic and then a surge. The source says authorities are trying to determine if those who went into cardiac arrest were the ones injected. We’re told one of those who died is a 10-year-old. The source says it appears to be a targeted attack. We have not confirmed this report, but the source is a key person involved in the festival.

Travis Scott‘s first night of his Astroworld concert in Houston turned into a horrific tragedy Friday night … leaving 8 people dead and more than 300 injured, and there were signs of trouble even before the concert began.

#BREAKING | At least 8 people died & several were injured in a stampede at the #Astroworld music festival in the southern #UnitedStates.

Disturbing video shows people jumping on top of the police personal cars while they were trying to get unconscious people out of the crowd. pic.twitter.com/CORFcHNxks

50,000 people filled the sold-out venue, when, at around 9 PM people began surging toward the stage. People started getting crushed and panic ensued. According to Houston Fire Chief Sam Pena, “People began to fall out, become unconscious and it created additional panic.”

At least 8 people died in the stampede. 11 people went into cardiac arrest and were rushed to the hospital. More than 300 fans went to the field hospital near the venue.

Someone working the festival tells TMZ … people were hopping on camera platforms, begging concert staff to end the show after the stampede erupted. They said, “Anything climbable was climbed.” They also say there were several thousand pairs of shoes left behind as people fled. When the concert shut down, they said a stage manager said the venue was now “a crime scene.”

The scene was chaotic … medical personnel could not handle all the injured. There is video showing some of them performing CPR.

One concertgoer named Madeline, a nurse, tells TMZ, she was there with her boyfriend when Travis took the stage. During the first song, people started pushing toward the stage and she says she began to feel light-headed, telling us, “I passed out from the constant pressure on my chest and was one of the first people to be carried,” adding, “They threw me on top of other people and crowd surfed me to other people, who lifted me over a fence where security was waiting.” She says “security guards were bringing bodies from that area to the VIP area,” as Travis kept performing, adding, “I see security carrying people who are not moving.” She says once she regained her senses, she began administering first aid to others. 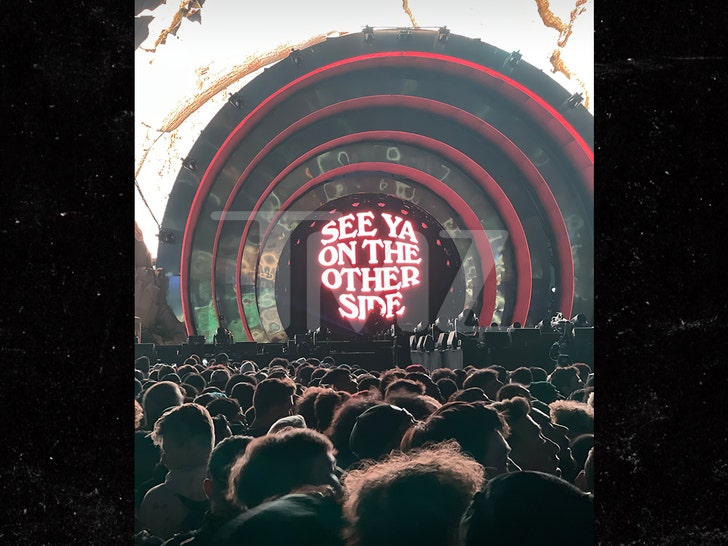 A slew of ambulances rushed to the scene … which became direr every minute.

Before chaos erupted, Travis stopped the show several times during his 75-minute set … after noticing some of the fans in the front seemed in distress. He told security to make sure they weren’t hurt. At one point Travis asked for security to help a specific individual.

Shortly before the surge, Drake had performed with Travis … and there was no indication the crowd would try to rush the stage. 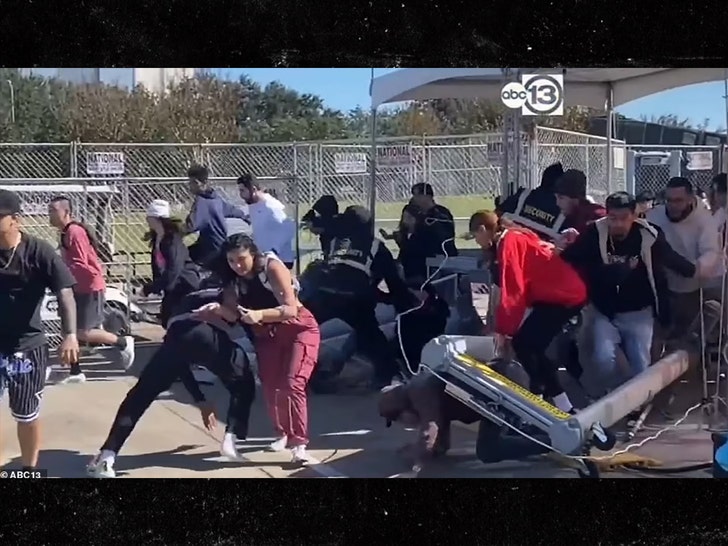 However, there were some signs of trouble even before the show. A slew of fans knocked over barricades and rushed into the venue.

Kylie Jenner was on hand for the festival as the chaos erupted. She was there with her and Travis’s daughter Stormi. As far as we know, they’re fine. They were not sitting near the crush.

A reunification center was set up at a nearby hotel, so family members of concert-goers could reunite.

The Medical Examiner is in the process of determining the cause of death of the 8 fatalities.

This was the first night of what was supposed to be a 3-day festival. The second night has already been canceled.

12:02 PM PT — A new video appears to show Travis reacting to this situation and calling for help. This is from another vantage point, but it seems to line up with the guy getting carried out. You hear Travis ask for security to jump in and help the man out … but he continues…